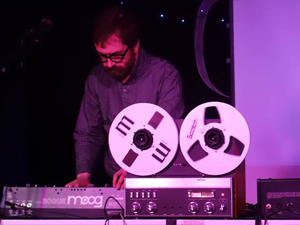 My parents bought me an old drum kit when I was fourteen. Looking back, I’m quite surprised, considering the musical path I’m sure they’d rather I’d taken.

The Groove Farm and beyond

The affectionately-titled ‘Hate Us and We’ll Love You to Death’ ep came out within a couple of months of my joining the Groove Farm in September 1988. The next two years were spent playing around the UK, and releasing a couple more EPs and an album – Plug – which became a John Peel favourite.

The band split in 1990, paving the way for Beatnik Filmstars and Girlboy Girl. I played drums with both bands before joining Cake, with friends Howard and Deb (ex-Flatmates).

I also decided to plough my own musical furrow, recording three tracks as Vision On, aided by finger style-guitarist Karl Taylor and The Groove Farm’s Rupert on bass. The project was shelved while I played drums and organ for ex-Sarah Records outfit Tramway, recording Siesta‘s first single, and a subsequent album. I also teamed up with a couple of ex-Groove Farmers and John Austin to form Airbomb Repeater, a surf instrumental band. We still get together about once every five years, to record the odd ep.

Eventually, the Vision On ep – Who’s Afraid of DeWolfe – came out on Mobstar Records. Japanese musician/producer Cornelius imported around two hundred copies and, by proxy, introduced me to Mike Alway who promptly licensed the Vision On tracks, including one (albeit credited to Tomorrow’s World) on his seminal Songs for the Jet Set album.

I continued to record for Mike, contributing the odd track here and there to albums released on the if… and Reverie labels, involving a vocal session with French chef-cum-sports-commentator Louis Philippe.

if…, Reverie and The Sound of Chartreuse

The beginning of the new millennium saw our first full length album: Songs For the Jet Set 2000, with contributions from Milky’s Shazna, Angie Tillett (Death By Chocolate) and ’70s teen idol and soundtrack composer Simon Turner.

Since then, I’ve written, recorded and produced under various names and with numerous collaborators. More information is available on the releases page.

Having worked at the University of Bristol for 23 years – the latter half as a web trainer and consultant –  I decided to go solo, mixing my music and web interests. Boum Studio took  off in August 2011 with the recording of a 24-track double album by singer and  author Peter Hawkins. Various  solo artists’ projects followed, ranging from the recording and arranging of  individual tracks,  to full CD production, including mastering and artwork .

In May 2012, I took part in a  Bristol schools film project, coaching and supervising groups of children in writing, arranging and recording a soundtrack.  The premiere took place at Bristol’s Orpheus Cinema, the following month.

Despite having written and produced many albums, I had never released a bona fide solo project. In 2013 – inspired by a walk at Brean Down – I decided to record an instrumental album inspired by the work of John Baker, a pioneering composer employed by the BBC Radiophonic Workshop during the ’60s and ’70s.

The Lighter Side of Concrete was released in October 2013.  Intended purely as a studio project, there were requests for live performances.  My partner Polly, who had assisted in various ways with the album, agreed to join me; The Twelve Hour Foundation was formed and began performing live in December 2013.

In addition to my work with the band, I have recorded jingles, themes and incidental music for film, promotional videos, radio, and music libraries.  For more information, see my recordings to date.